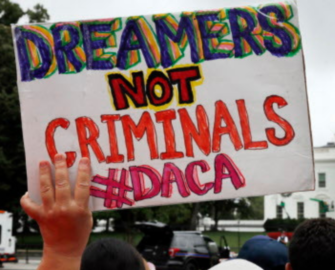 Right now, hundreds of thousands of residents are on the edge of losing their jobs. They are our neighbors and our friends. They pay taxes and invest their time and energy into making their communities better places to live.

These neighbors are not in danger of being fired because of poor job performance. They are not worried about being laid off because their employers are downsizing. They are on the edge of being fired by Donald Trump as he considers destroying the DACA program.

DACA is an acronym for Deferred Action on Childhood Arrivals and it allows the children of undocumented immigrants to attend school and work in the United States while Congress gets its act together to reform our dysfunctional immigration system. But DACA stands for much more than that for these hardworking immigrants, many of whom grew up and went to school here. The United States is the only country they have ever really known.

It is very likely that you have encountered someone in the DACA program and did not realize it. They probably spoke perfect English and shared similar interests with you, perhaps in music, sports, or other activities.  For several, they did not even know they were undocumented until they applied for a job or enrolled in college.

As a graduate student at Brown University, one of my classmates was a DACA student. Mateus was brought to the United States from South America at a very young age and grew up in New Jersey.  That was his home and being the good Jersey boy that he was, he went to Rutgers University. It was only in 2013 that NJ allowed in-state tuition for undocumented students, by that time Mateus had already transferred to Brown University

Fortunately, Mateus had a mentor looking out for him.  He transferred to Brown University and later applied to and was accepted by DACA. That is where we met, in the Urban Education Policy program. He was a brilliant student and a dedicated friend to others in the program. Mateus often spoke of going home to Newark, where he grew up, because that was where he wanted to make a difference.

Mateus graduated, served as a Congressional Hispanic Scholarship Graduate Fellow, and spoke on panels with then-Education Secretary John King. Mateus then returned home to serve on Newark’s LGBTQ Commission and works for an education foundation where he approves grants to invest money so other Newark kids like him can have more opportunities to succeed. His enthusiasm for America and his hometown helped strengthen my own appreciation for our freedom and my Southern California roots.

That is just one example of the more than 800,000 immigrants covered by DACA who are working hard, paying taxes, and making their communities better because they had the opportunity to get an education and work. Yet Trump is considering abolishing DACA so those 800,000 individuals would be out of work and at-risk for deportation. Not only would that be devastating for these residents and the communities they serve, it would tear families apart and be an economic debacle for employers, reducing national economic growth by $460 billion over the next ten years.

For DREAMers, DACA stands for opportunity. The opportunity to be a productive member of one’s community.  The opportunity to serve others and improve lives. That is exactly what Mateus is doing.  We must all stand up to ensure those opportunities to produce and serve. Tell Congress and Trump to protect DACA and pass real immigration reform.

The Gilbert and Jacki Cisneros Foundation works to cultivate a community that supports Hispanic student education. We support efforts that help enlighten others to the many benefits of a college education. We believe these benefits extend not only to individuals, but whole communities.